Last Sunday at 8pm, the 37th edition of ARCO Madrid closed its doors after five days of the fair. With approximately 100 000 visitors coming through the gates, 30 000 of them being art market profesionals and more than 300 collectors flying in from all over the world to attend; Arco is definitely a force to be reckoned with. Impressively enough, the Spanish fair repeatedly surpasses in attendance major art events such as Art Basel, Frieze and FIAC. The 2018 edition seems to be a great success as early estimates declare a 10 to 20% augmentation in sales*, and even described as the best year since the beginning of the crisis (2008). 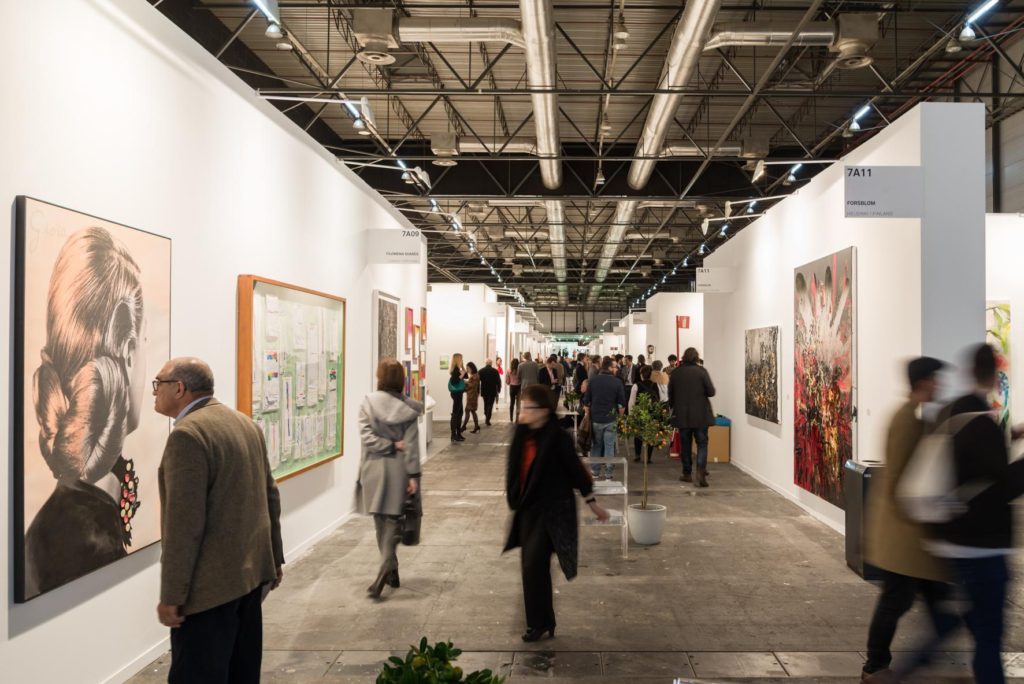 As described in a previous article , this edition of ARCO featured 208 galleries from 29 countries showcasing more than 1500 artists over 30 000 square meters divided into 4 sectors: Opening, Dialogue, The Future and the General Program.  This article offers a brief survey of each sections and concludes with the controversy surrounding the removal of Santiago Sierra’s artwork.

Opening presented 19 galleries and was curated by Llaria Gianni (Curator, Critic & Associate Professor) and Stefanie Hessler (Visual Art Writer & Curator). The concept was to feature young galleries (open for 7 years or less) who dedicate themselves to an innovative contemporary program. Two Spanish galleries were selected as part of Opening: Galería Alegría, showcasing the stunning minimalist sculptures of Lars Worm and Espai Tactel from Valencia. 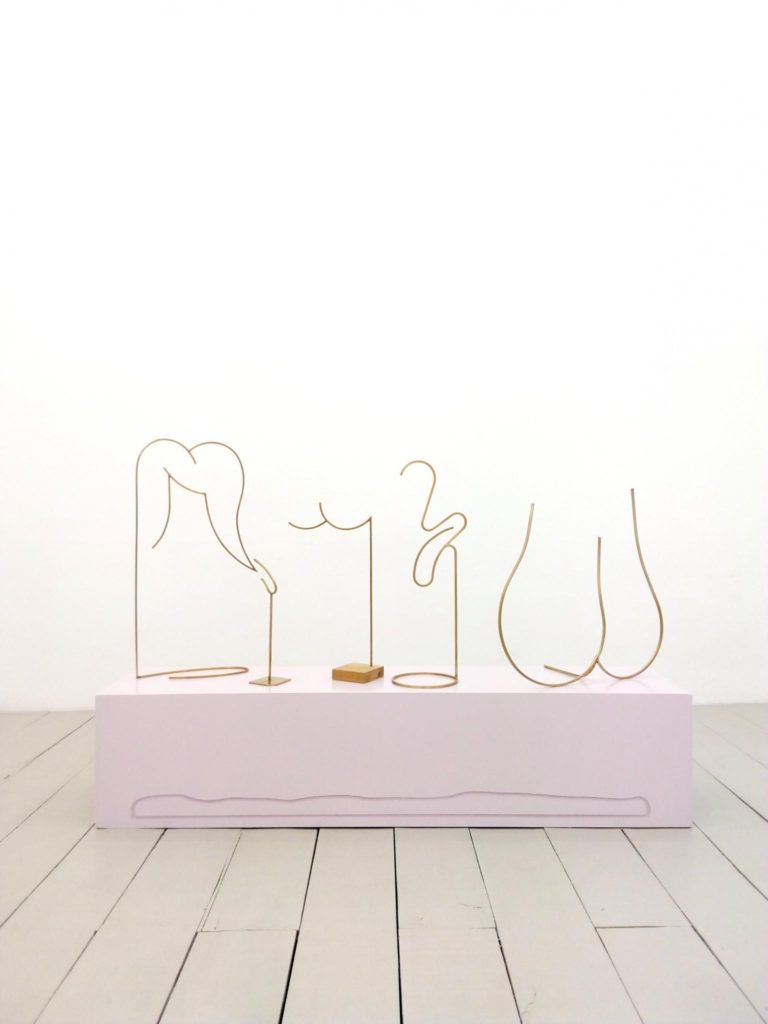 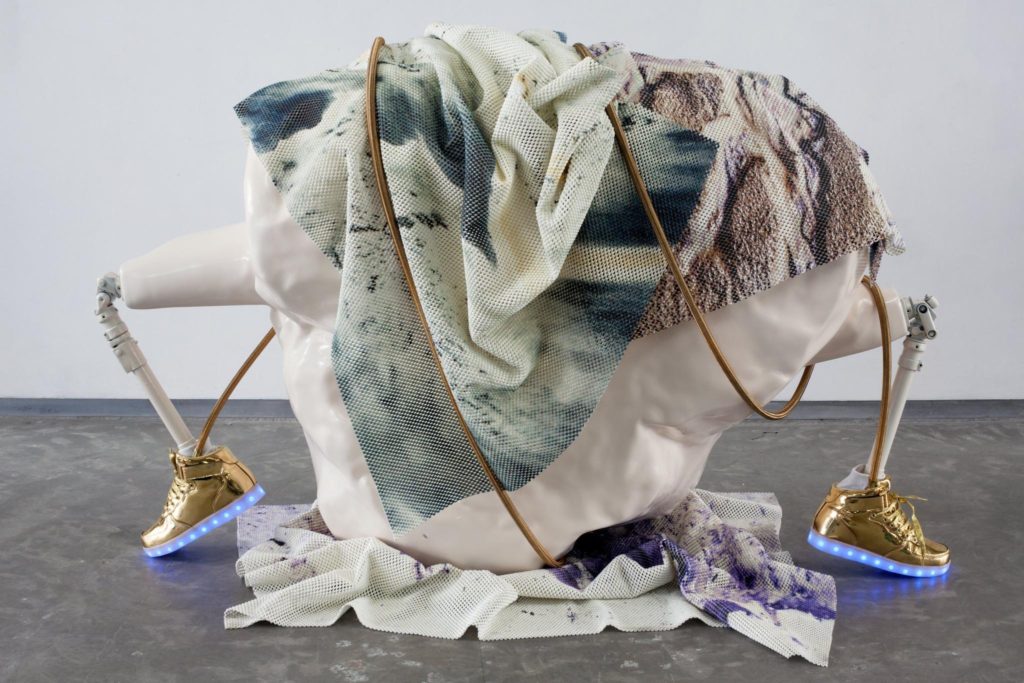 The dialogue section was cleverly located within the main hallway connecting the entrances of the two pavilion where the fair took place. Thus every spectator had to pass through this section during their visit and could admire the conceptual and minimal art installations proposed by the 14 galleries exhibited. The disposition of the booths, occupying the main hallway while facing the same direction reinforced the power of the title. Numerous dialogues were taking place simultaneously; between cultures, between art forms, between artists, galerists and visitors. 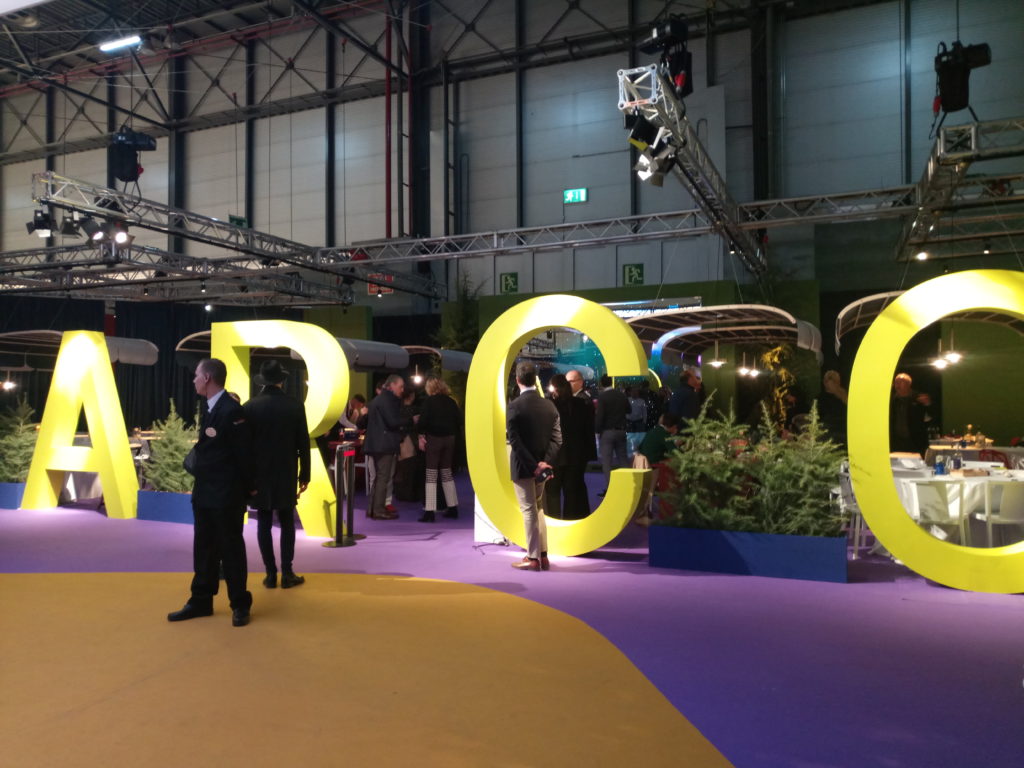 The utopian nature of the Future section was quite obvious, but brought a fresh perspective on the critical challenges of our time. Holding the extensive title of: the “future” it is not what is going to happen but what we are going to do about it, the aim was to foment debate and discussions regarding contemporary problematic that affect more than just the art world. The use of a flashy green carpet covering the entire section helped to draw attention and to distinguish this sector from the rest of fair. Futuro presented the work of 18 galleries and art centers where each artist highlighted the complicated relationship between individual actions and global consequences. 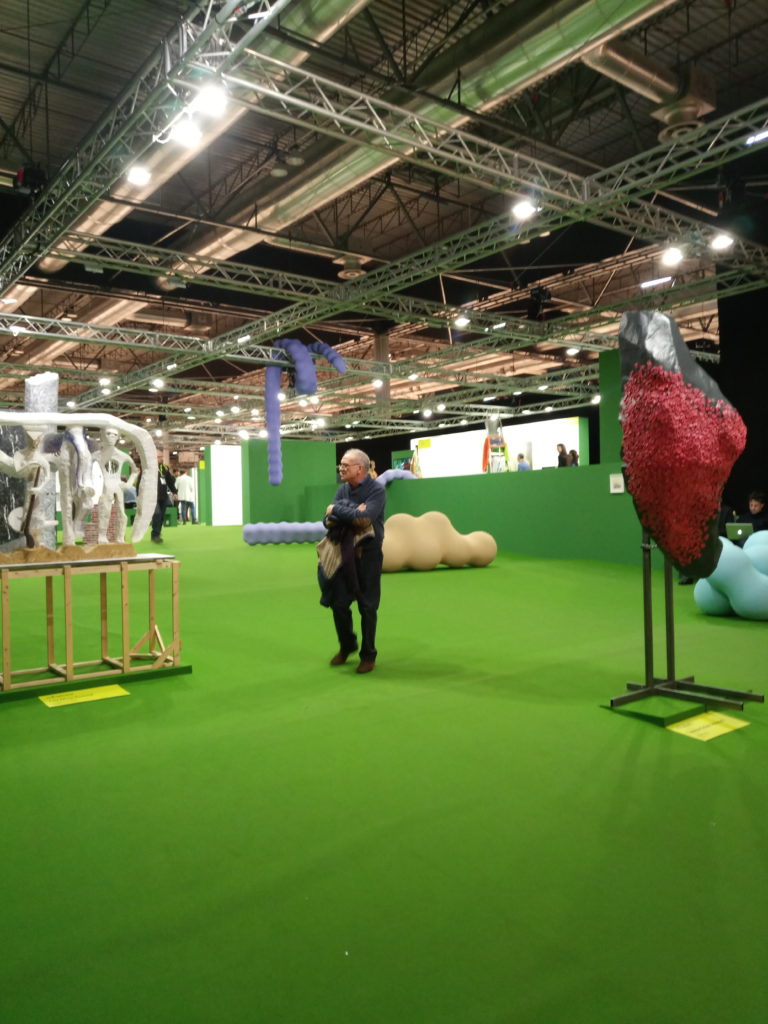 Numerous collectors and art profesional recognized that ARCO was very strong this year and that  “museum-quality” artworks were covering the walls. The general program showcased 160 galleries where 62 were Spanish and 67% of the international galleries were South-American. Brazil especially stand out in this edition with 15 galleries on show. They’re seem to have been a good balance between the display of established contemporary artist such as Carlos Cruz Diez, Angela de la Cruz, Richard Serra, Xiomin Badiola, Katharina Gross, etc,  and the presence of younger emerging artists. Paintings and sculptures were dominant throughout the fair, however, a wide variety of mixed medium installations and light-art pieces were exhibited. 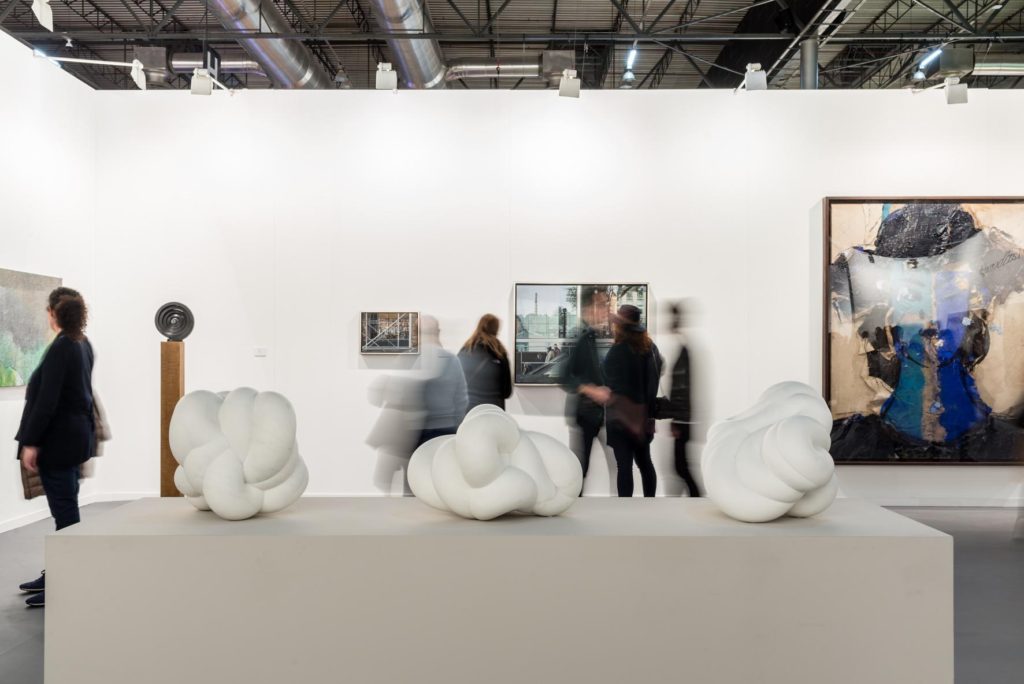 It would imposible to continue this article without mentioning the audacious inclusion of a live performance within the fair. This artwork captivated every single visitor imagination’s and must have been the most photographed artwork during the weekend. The work consists of as a person dressed in white (sometimes a women, sometimes a men) laid still on a high metallic structure showcasing a flickering neon light colocated within a plexiglass box. The performer can feel the blip of the light and then adjust his breathing to the frantic pace of the dying neon. 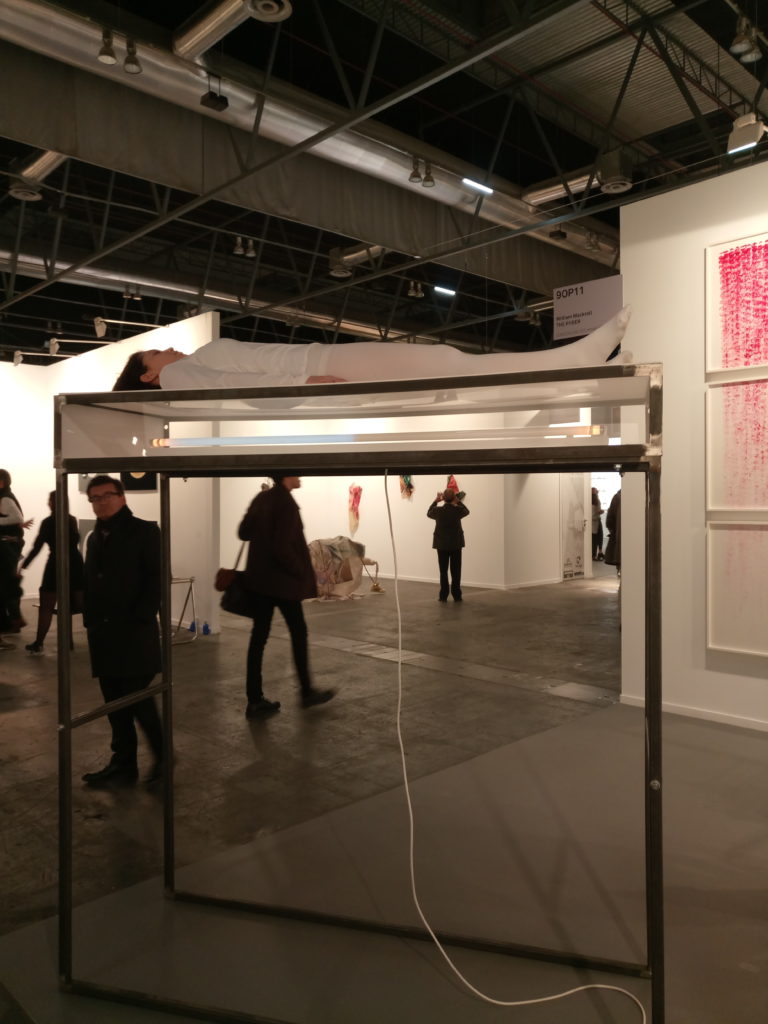 Spanish galerist Patricia Lara founded her space The Ryder Projects in London three years ago and chose to showcase the work of William Mackerell (the first artist she exposed in her gallery). As her program focuses on performative and new-media art, she felt necessary to showcase the hole range of Mackerell’s practice.

Yes, the piece titled Intervention was available for purchase. The buyer receives the metallic structure, the instruction on how to activate the performance and the artist promise to supply him/her with a lifetime supply of fading neons.

If, as reported, the intention of IFEMA’s director Eduardo López-Puertas was to avoid any controversy by taking down a certain artwork before the VIP opening on Wednesday I think it is an understatement to declare that he created the polar opposite. As you may have notice, this decision was strongly criticized by traditional and social medias from all over the world. From the first hours, on social media #arco and #censure almost became synonyms. The controversy also reached Spanish parlament and the mayor of Madrid Manuel Carmena refused to attend the official opening of the fair. 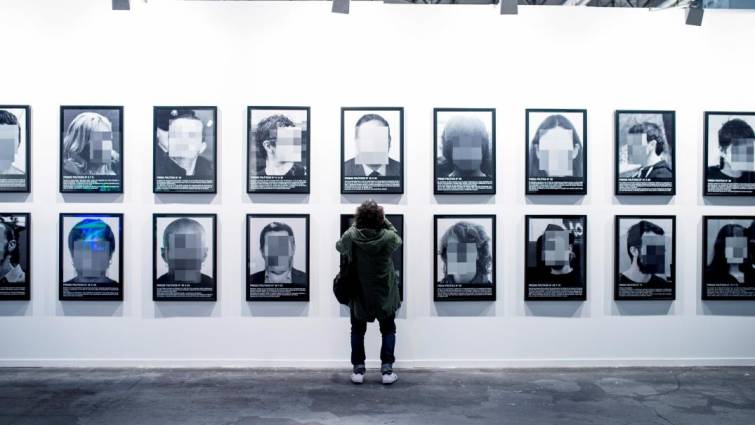 The main controversy surrounding the artwork by Santiago Sierra was the title: Political Prisoners in Contemporary Spain. As no conclusive outcome around Catalunya’s independence have been established yet, the public opinion is still very sensible. There are three (or maybe more) sides to this story. First people who think that it is an outrage that the word Political Prisoners have been used as they consider the politicians represented by the artist to have committed acts outside the law and shouldn’t be represented in a profesional art fair like ARCO. Then, there is the vision that taking down the artwork is another proof of Spain’s repressive regime against Catalunya. Last but not least, there are people who think that any action that can maintain peace and put the least emphasis posible on the issue is the best thing to do whatever the cost. 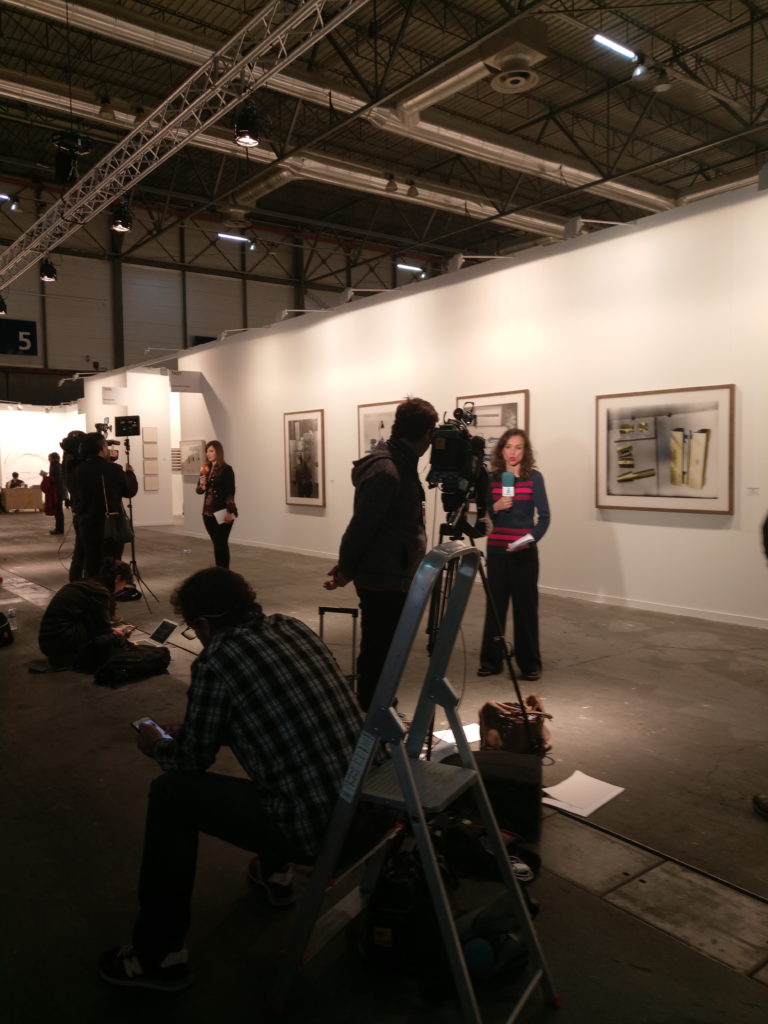 TV Crews filming in front of the wall where Santiago Sierra artwork was taken down. @Camila Jourdain

However, I think it’s important to take into account the benefits that one may obtain by this kind of press coverage. Media tycoon Tatxo Benet acquired the artwork before the opening of the fair for 80 000 euros. Would the same artwork have created the same media stir if it stayed on the wall? A lot of questions remain unanswered, but one thing is certain, the value of Presos Politicos en la España Contemporánea has certainly doubled (or more) since Wednesday and the international reputation of the artist has never been stronger…

From our experience at The Art Market, we can attest that this edition of ARCO was a success not only in terms of sales, but also regarding attendance, quality of works and positive vibes. Even after 37 years of existence, ARCO continues to reunite the highest quality of dealers, institutions, artworks, critical thinking and a fabulous art-enthusiast public.

In a few days, if not a few hours different online platform will publish their traditional “what sold at ARCO” article and we will be able to confirm if truly the market has regain its pre-2008 strength and what the future seems to hold for the Spanish contemporary art market.