27 Ago One hour at the Prado Museum

One of the unmissable visits of Madrid is the Prado Museum. Like all the great national museums, its permanent collection is numerous, and to visit it completely during few days in the capital, or even as a Madrilenian without much time to invest in art, can be done uphill. Not only is the lack of time: the art may be liked but not so much to want to see all and all the rooms of the museum, and it can even be somewhat overwhelming to make a screening of their works without knowledge of the art world.

For these reasons, the Museum has raised visits of one and two hours, with a selection of fifteen and thirty, respectively, recommended works for a brief, condensed and without missing the most essential. Here we analyze the one-hour visit:

Dated between 1509 and 1519, it is an oil on board of 123 x 169 cm. Raised for the cathedral of Palencia, specifically for the central street of the bench of the main altarpiece. These data, once an unknown, have been discovered thanks to the study conducted on the documentation of the cathedral of Palencia, which has also given us the name of its author, Juan de Flandes. This table was sold by the cabildo in 1944, after forming part of the main altarpiece, made by Felipe Bigarny and Pedro de Guadalupe. Juan de Flandes participated as a painter, after his consideration as court painter of Isabel la Católica. It is believed that his participation was crucial, and that he even moved his workshop from Salamanca to Palencia, due to the importance of the contract between him and Bishop Fonseca, in December 19, 1509, to make eleven paintings for the altarpiece . This table in particular corresponds to the iconographic typology of great spectacle, of landscape format and that highlights the major figures: a Christ of three nails in the first instance, inherited from flemish types such as Memling, van der Weyden and van Eyck. It is located in room 057.

2. Nobleman with his hand on his chest, El Greco. 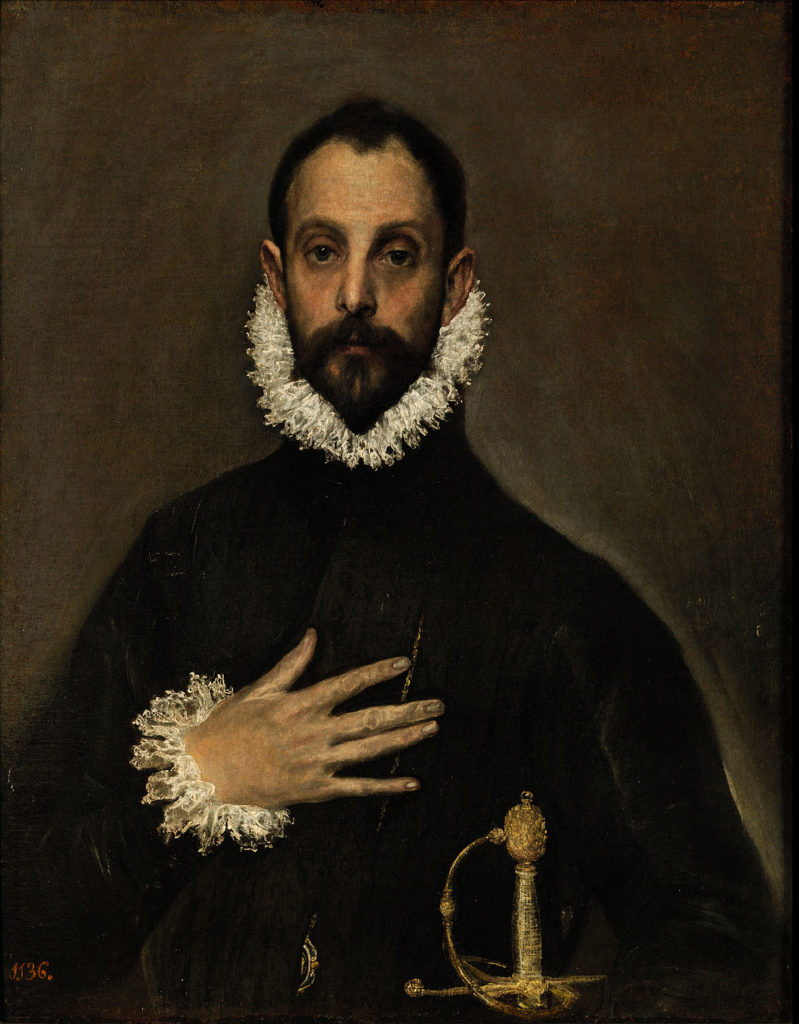 Made around 1580, it is an oil on canvas of 81.1 x 66.1 cm. It is a portrait that belonged to the Royal Collections since its donation by the Duchess of Arc after the death of her husband, who was a senior monk of Philip V. Along with this were six other portraits of gentlemen painted by El Greco. It has been a well-known and controversial work as a result of its recent restoration, in which the cleanliness of the varnish left in sight a clear and diaphanous background, nothing to do with the dark background characteristic of the work. This restoration led to a judicial process to clarify what happened, and if in fact only the varnish was removed and a normal cleaning was carried out or, unconsciously or by mistake, the original pictorial layers of the work were eliminated. Today is a must in the Museum, because there is no doubt that it is one of the best examples of portraits of the time. It is located in room 008B. 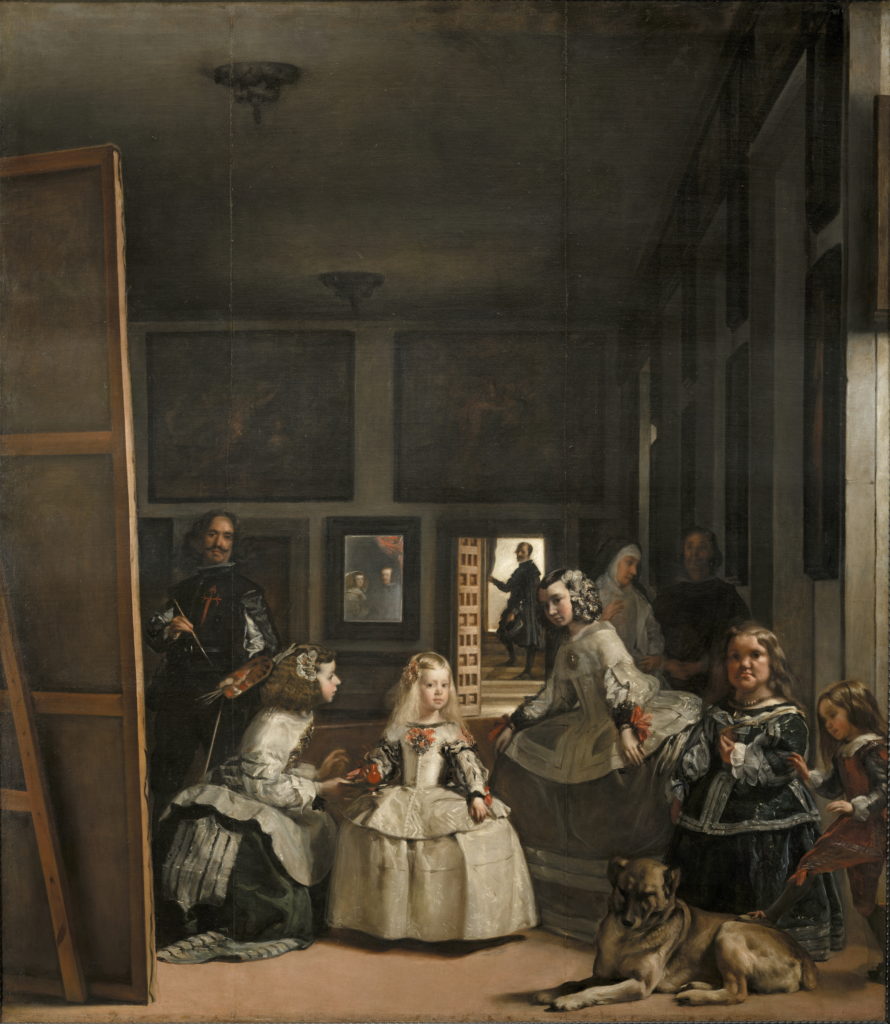 Made in 1656, it is an oil on canvas of 320.5 x 281.5 cm. We are faced with what is, in all likelihood, the most complex composition of Philip IV’s camera painter. It is a masterpiece, and was painted in Prince’s room, in the Madrid’s Alcazar, also identifying all the components of the anticlassical work. The Infanta Margarita appears with Lady Maria Agustina Sarmiento and Lady Isabel de Velasco, the dwarfs Mari Bárbola and Nicolasito Pertusato, Marcela de Ulloa, José Nieto, and reflected as alleged objects of the work that Velázquez is painting, Felipe IV and Mariana de Austria. It is a great example of history painting, and shows the different realities of palace life outside the usual portraits of Spanish kings, in a clear masterpiece by Velázquez. It is located in room 012. 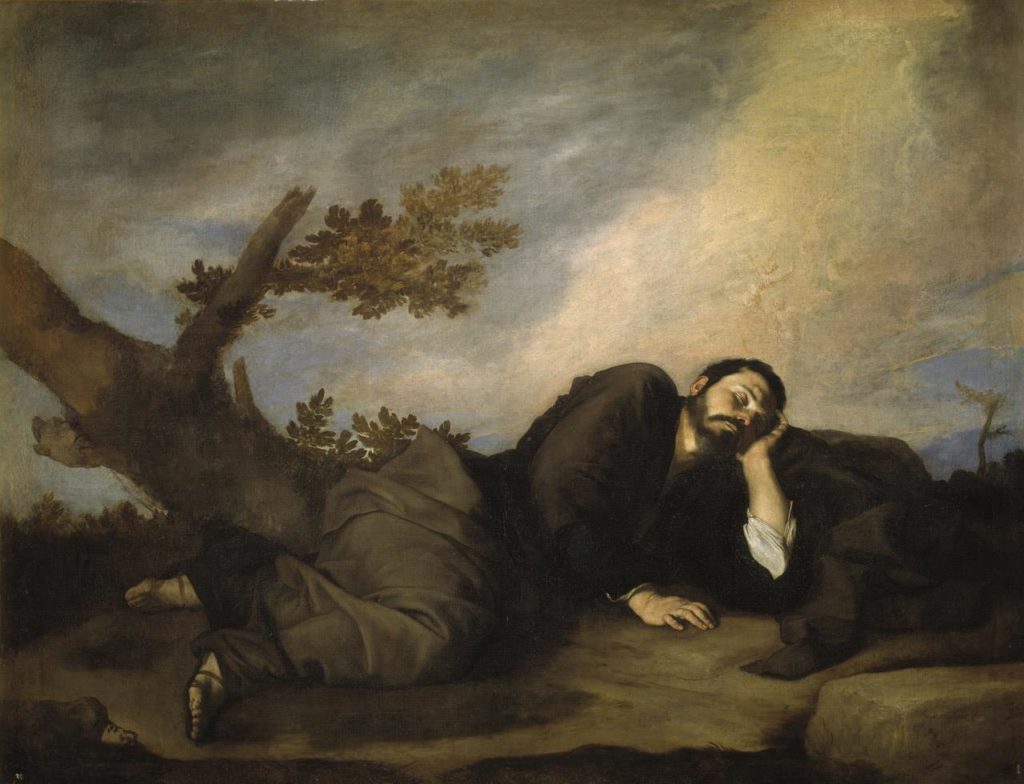 It was made in 1639, it is an oil on canvas of 179 x 233 cm. It portrays the Jacob’s dream, patriarch of the Christian religion. He is lying on his left arm, as recounted in the biblical book of Genesis, and behind him we can see the ladder by which the angels go up and down. Ribera treats the subject, fundamentally metaphorical and iconographic, from an earthly perspective supported by the solidity of the landscape and the character. It was in the power of Sir Jerónimo de la Torre until 1718, appearing again in 1746 in the collection of Isabel de Farnesio, although attributed at that time to Murillo. It is located in room 009. 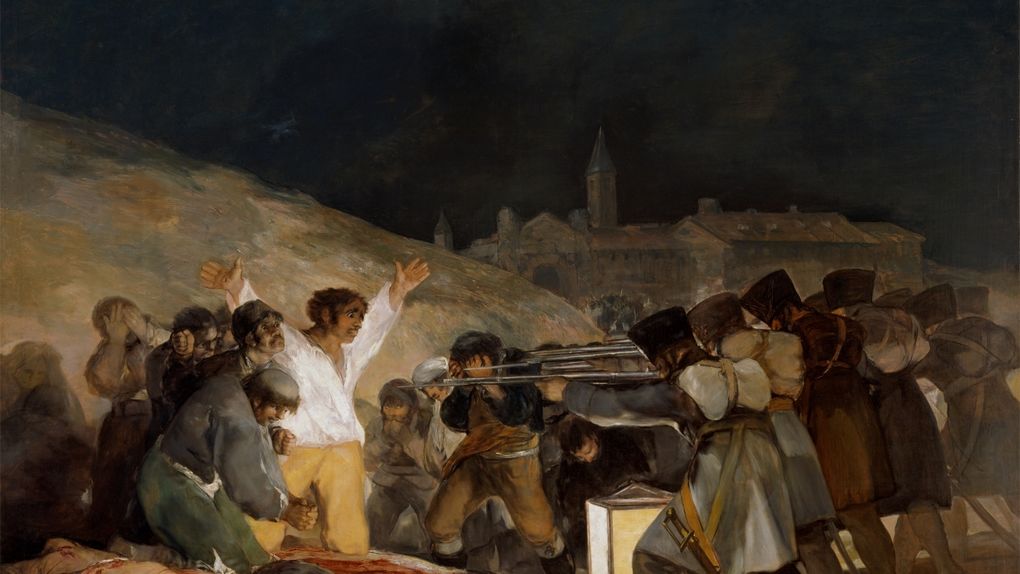 Also known as The Executions of May 3, was made in 1814, is an oil on canvas and measures 268 x 347 cm. Fernando VII returned to Spain after the end of the War of Independence and the signing of the Treaty of Valençay, having already sworn the Constitution of 1812. These works were made coinciding with the return of the king, commemorating the anniversary of the uprising of 2 and 3 May of Madrid in 1808 against the French occupation. Although at first it was believed that both canvases were going to be presented in the streets of the capital, a subsequent study showed that nowhere in the approach of these celebrations did these works fit. It was Goya himself who proposed the realization of these two works, the one that concerns us and the one known as May 2 in Madrid or the fight with the Mamluks, and it seems that inside they hide references to the heroism of the people of Madrid in the fight for the Crown, which later Ferdinand VII dishonored by repealing the Constitution and slowing down the entire process. It is located in room 064. 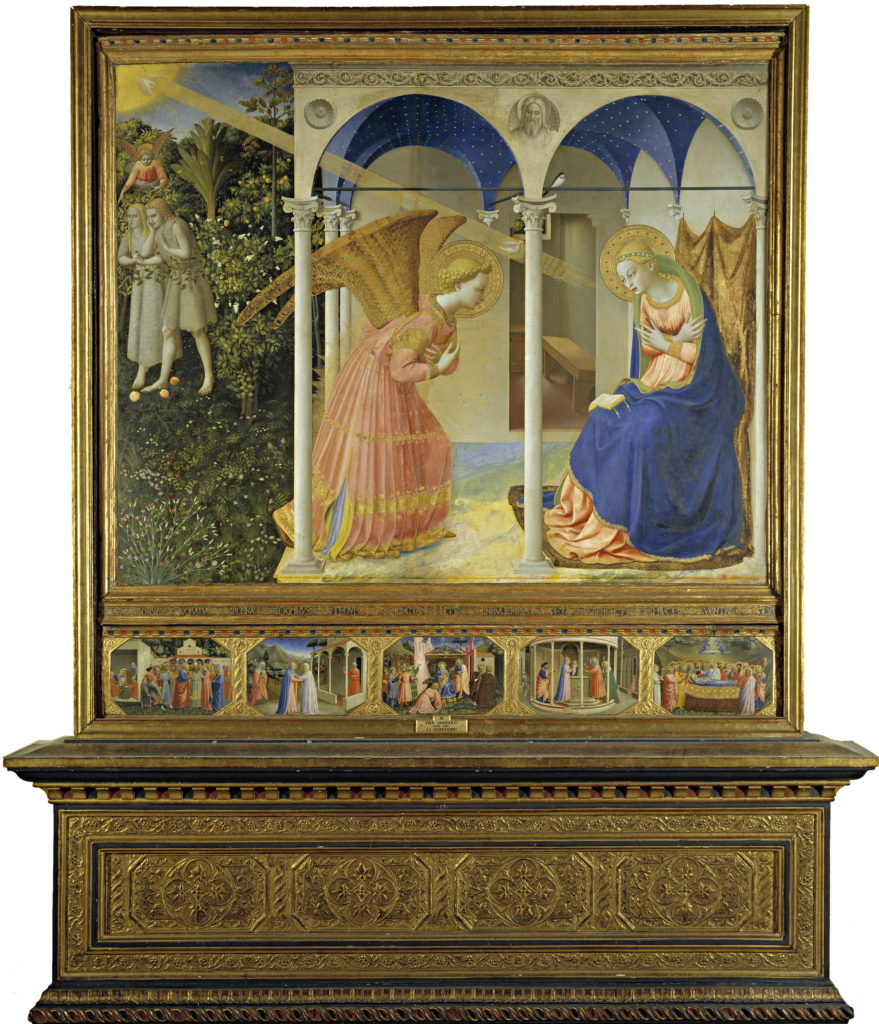 Realized between 1425 and 1426, in tempera on table, with measures of 190.3 x 191.5 cm. It is among the first works of the artist of which we have record, already within his period as a Dominican (actually under the name of Fra Giovanni de Fiesole). It was destined for the convent of Santo Domingo de Fiesole, and commissioned by Angelo di Zanobi and Taddeo Gaddi. For years it was considered a reinvention of the Annunciation of da Cortona, although now we know that it is the artist’s original work, influenced by others of the stature of Brunelleschi and Masaccio. In the predella it shows different scenes from the life of the Virgin, and obeys the advice of Brunelleschi for the sober and unadorned frames. 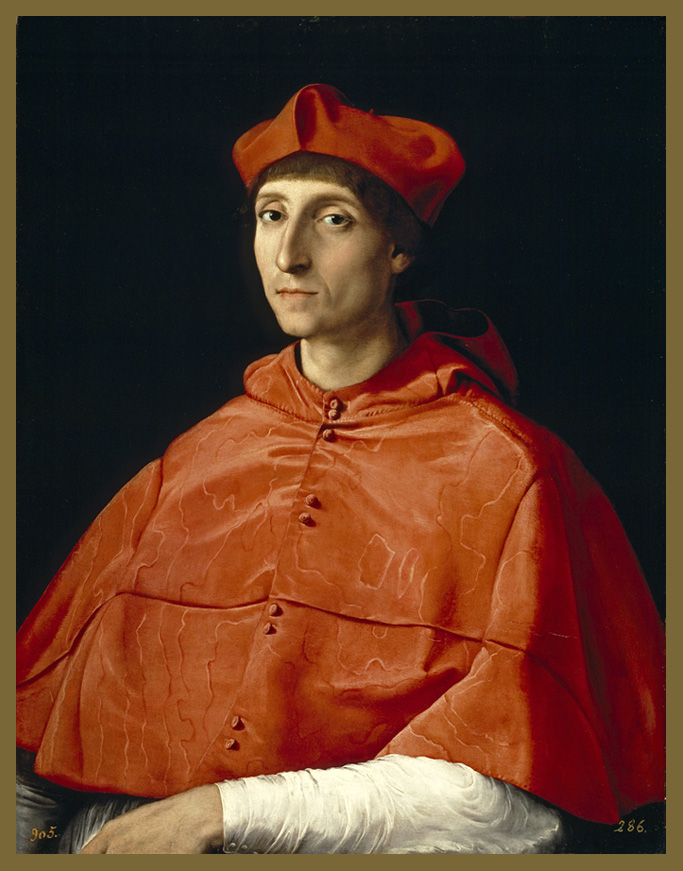 Made between 1510 and 1511, it is an oil on panel of 79 x 61 cm. At first it was believed that the portrayed was Antonio Granvela, but with the attribution of the work to Rafael it was clear the impossibility of this option. Currently considered Bendinello Suardi (and would have been portrayed by Sebastiano del Piombo) or Francesco Alidosi (mainly by physical similarity). The tonality and ability to emulate fabrics at such an early age would be due to the influence of, among other Venetian painters, Lorenzo Lotto. It is located in room 049. 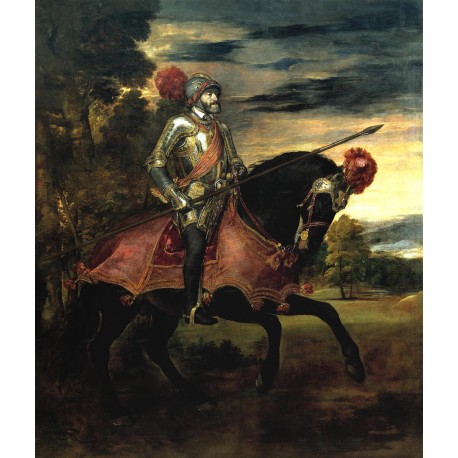 Made in 1548, it is an oil on canvas of 335 x 283 cm. It commemorates the victory of the Emperor Carlos V in this battle, and appears in his light armor, made by Desiderius Helmschmid in 1545. As Panofsky said in his day, this representation points to the conception that the emperor had of himself: heir of the Roman tradition and, at the same time, its position as thousands christianus. Iconographically, this portrait is one of the most interesting of his time. His referents are located in classic works, such as Marco Aurelio equestrian or the art of Alberto Durero. It is located in room 027. 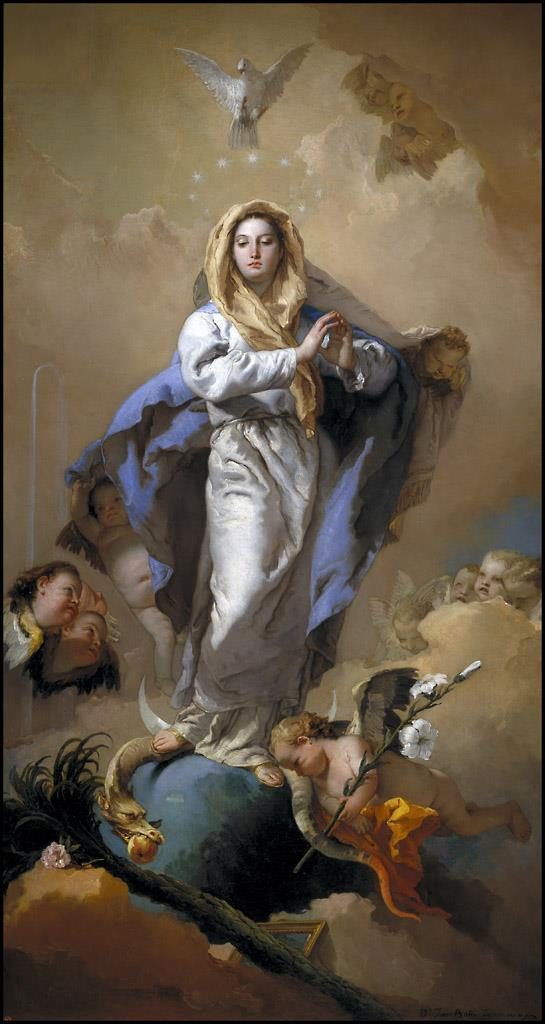 Made between 1767 and 1769, it is an oil on canvas of 281 x 155 cm. This representation obeys the typical canons of religious iconography, showing the Virgin on the ball of the world, stepping on the serpent and crowned by the Holy Spirit. He is accompanied by the classic angels, the lilies symbol of itself, the palm tree, the fountain and the mirror. It was a commission for the Church of San Pascual de Aranjuez. It is located in room 019. 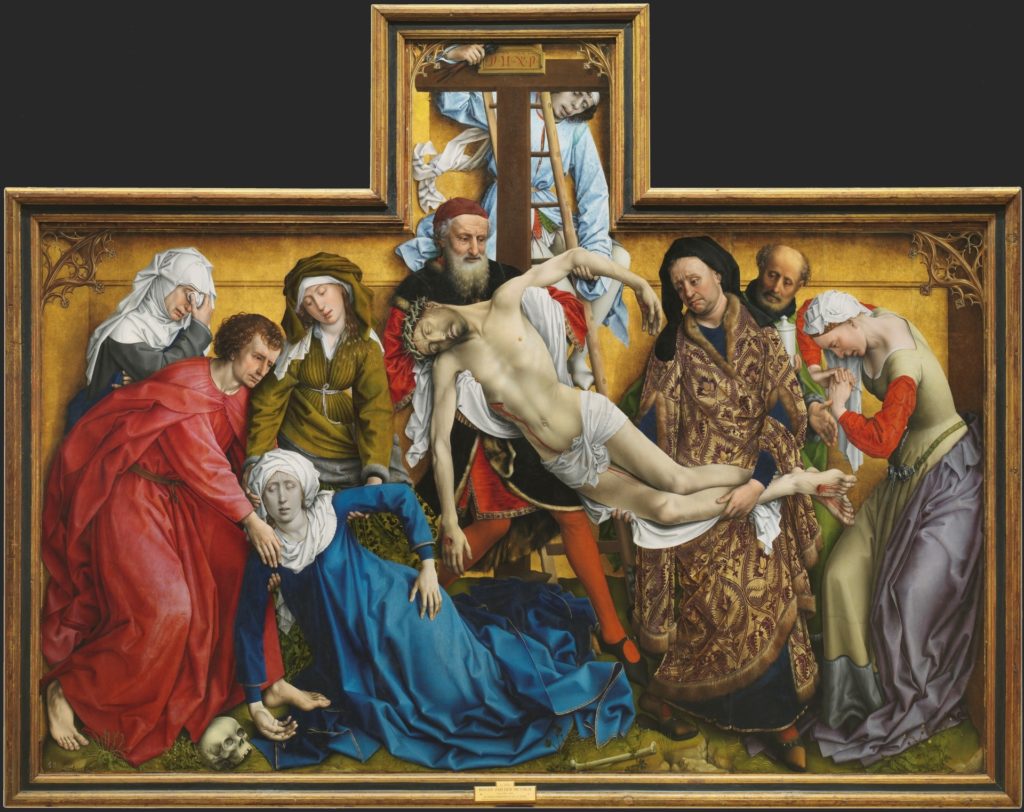 It was made before 1443, and is an oil on wood of 204.5 x 261.5 cm. It was raised for the chapel of Our Lady Extramuros of Louvain, it was bought by María de Hungría in 1549, to later pass in 1564 to the property of Felipe II, and from 1566 to 1939, when it passed to the Prado Museum, it was in the Monastery of the Escorial. It represents the moment of the Descent from the cross by three men: Nicodemus, a servant who holds the nails removed, and Joseph of Arimathea. In the scene we also see Mary Magdalene, Our Lady faint, St. John the Evangelist holding the latter helped by Maria Salome and, after him, Maria Cleofas. It is located in room 058.

11. Triptych of the Garden of Earthly Delights, El Bosco. 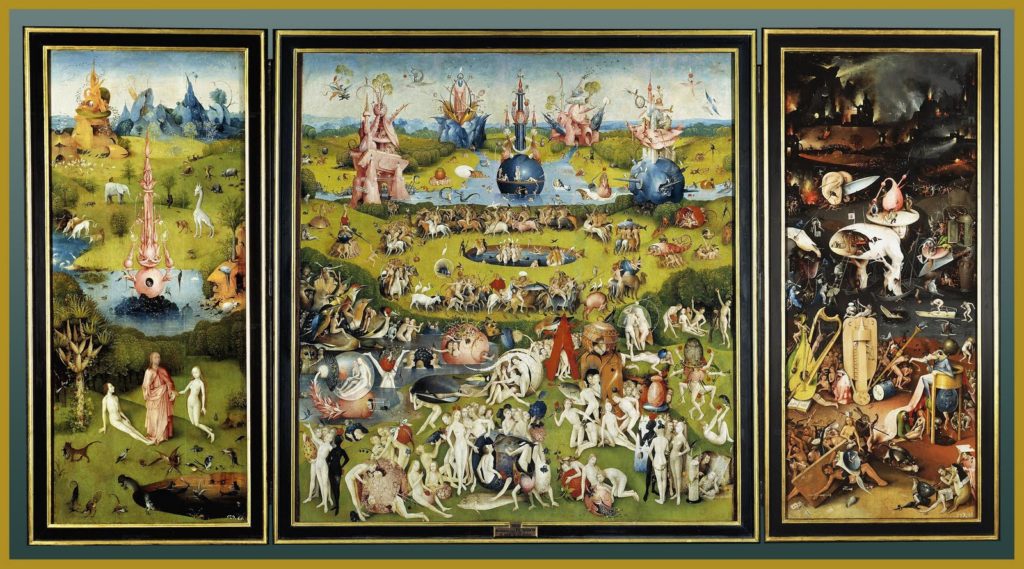 Made between 1490 and 1500, in grisaille and oil on oak wood board of 220 x 389 cm. It deals with the fate of humanity, just as it did in The Hay Cart. What is represented is the third day of the Creation of the World, with the appearance of God, and the world in grisaille in the closed triptych. While the left panel presents Adam and Eve in Paradise, the left panel shows the tortures of Hell. In the center, the earthly world possessed by capital sins, especially lust. Once again, we see a work in which the iconographic study is extensive and extremely interesting. 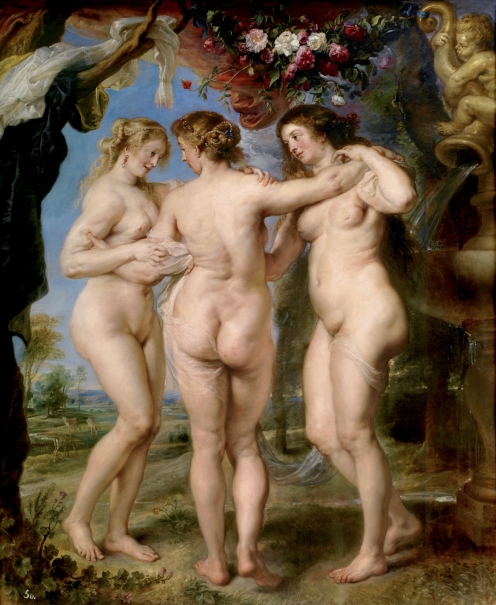 Made between 1630 and 1635, it is an oil on wooden board of oak of 220.5 x 182 cm. It evidently refers to the Greco-Roman myth of the Graces, daughters of Jupiter and Eurymone, and called Aglae, Eufrosina and Talía: symbol of beauty, love, sexuality and generosity. It belongs to the final era of Rubens, which is clearly seen in the whole, even more if we study in comparison the different versions of the same theme that the artist does. He entered the royal collection in 1640, with Felipe IV acquiring a large number of works by the artist: the curious thing is that this work does not appear in the registry of those acquired in this sale, but it is documented in 1666 in the Alcázar of Madrid. It is located in room 029.

Made in 1498, it is an oil on panel of 52 x 41 cm. Dürer appears portrayed as a gentile, and covers his hands to raise his social status, something he had been trying to do since the beginning of the Italian Renaissance. In 1636 the City Council of Nüremberg gave the piece to Charles I of England, then sold to Don Luis de Haro, who gave it in 1654 to Felipe IV. It is located in room 055B. 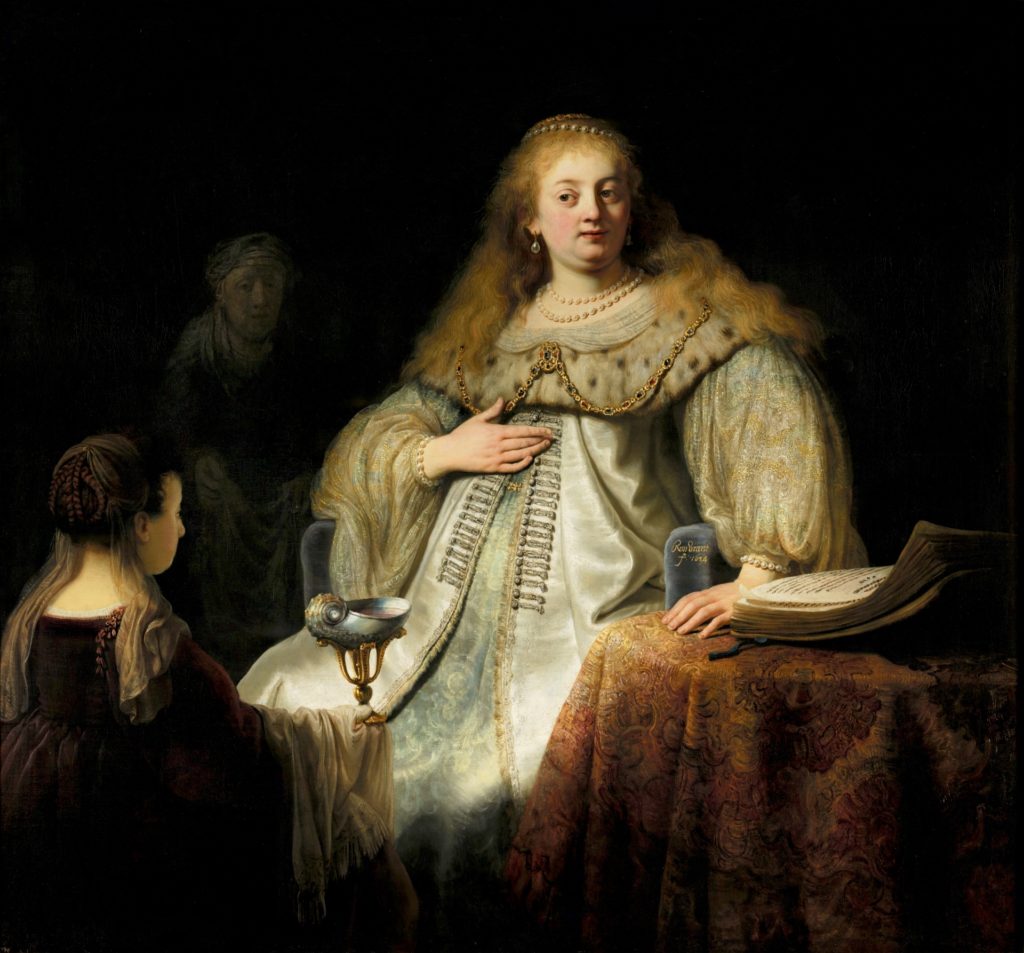 Made in 1634, it is an oil on canvas of 143 x 154.7 cm. It is included in the Rembrandt Research Project, which is ratified by the recent study of the Prado Museum (1986), after there were doubts about its authorship due to the signature and color of the work. It was also considered that Artemis was going to drink the ashes of Mausolo, but when analyzing the composition and typology of the work, we find how it is reinterpreted as Judith. It is, in addition, a figure very used in the self-vindication of the Dutch before Spain. It is located in room 076.

15. Orestes and Pílades, or the San Ildefonso group.

This sculptural group was made around 10 a.C. in white Carrara marble, 161 x 106 cm. The name derives from the place where the work was found in the 18th century, and was used as a model for the decoration of palaces and gardens throughout Europe. It is documented since 1623, drawn by Poussin in 1630 and published again in 1767 by Winckelmann. It is not fully Hellenistic, it only presents the frontal point of view, and the undulation of the bodies appears in the form of S, with a triangular space. In short, it belongs to the late-Hellenistic and Roman period, and both models come from different centuries but have been assimilated over time. Remember the Pasite Groups. It is located in room 071.