Durán Arte y Subasta’s next live auction will take place on March 20th at 6pm (UTC+1). More than 600 lots will be auctioned showcasing excepcional variety in the meanings of paintings, sculptures, jewellery, prints, numismatics, silverware and more. As we do every month, here is our team’s selection of outstanding lots. We begin with an exceptional work by Cordobese painter Julio Romero de Torres (1874 – 1930) Portrait of Teresa. Romero de Torres is renown internationally for depicting sensual and complex feminine characters. In this case, he portrayed his muse and  friend, Teresa Wilms Montt (pseudonym Teresa de la Cruz) an avant-garde Chilean writer, poet and precursor of the feminist movement. This masterpiece was painted in 1920, is signed both on the front and on the back of the canvas and is offered for € 60.000. (See here). 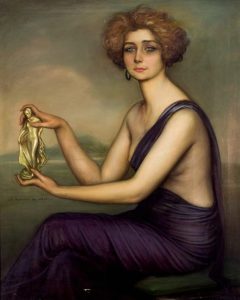 We continue with lot 90; an oil on canvas realized by Andalusian painter Salvador Sanchez-Barbudo (1857-1917). Sanchez-Barbudo was active mainly in Rome and was greatly inspired by the Romantic Spanish master Mariano Fortuny. This piece, titled Nocturno en Trasimeno (Nocturnal at Lake Trasimeno) is signed on the bottom right corner and illustrates how the painter mastered the effects of light over water, just as the French Impressionists did. The painting is offered at € 11.000. (See here) 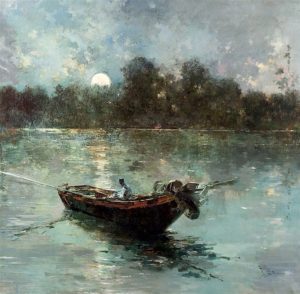 Carrying on with Spanish masters, four beautiful limited edition Irabia porcelain plates created in collaboration with Salvador Dalí (1904-1989) a year before his death, are included in the sale. The pieces illustrate different scenes from Dante’s Divine Comedy: The Tree of Penitence, The Celestial Helmsman, Avaricious and Prodigal, and finally Departure For The Great Journey. These four lots will be auctioned separately with their respective certificate of authenticity and are priced at € 150 each. (See here) 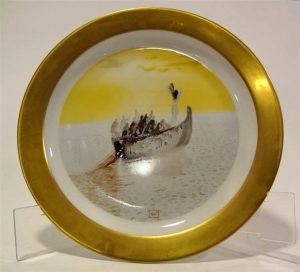 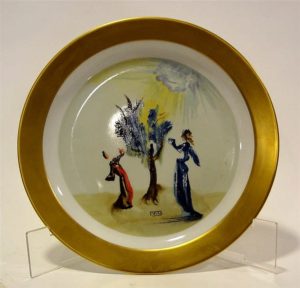 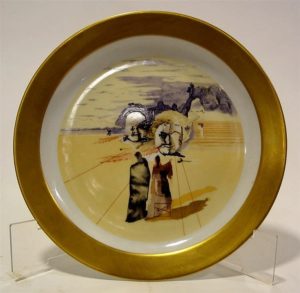 Also by Dalí, Durán is offering this stunning serigraphy titled Le chevalier chrétien (The Christian Knight). This artwork is printed on silk and was realized using 13 different shades of ink. The dimensions of this limited series edition are 91 cm by 91 cm and the buyer will receive the corresponding authenticity certificate. Lot 669 is offered for € 300. (see here) 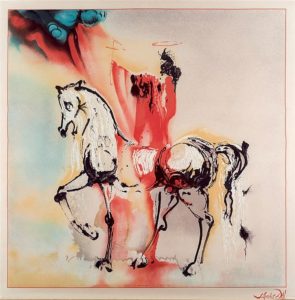 Regarding the Antiques section, we’ve highlighted two fascinating and unique objects. First, lot 418; a miniature book of hour made of gilded silver a with applications of antique faux-ivory and 14 enamel inserts representing Saint-Catherine and Saint-Lucy. This 2009 re-edition was  limited to 980 exemplars and contains 30 miniatures created by the prestigious Milanese workshop of Giovanni Ambrogio de Predis. The original Il libro d’ore Torriani (The Torriani book of hours) is conserved in the Archives of Château de Chantilly and was created in Milan in 1495. This lot is offered at auction for € 750. (see here) 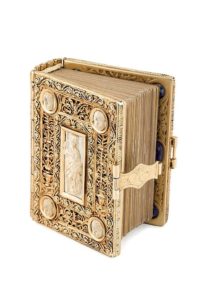 Going even further back in time, Durán is offering this well preserved Hispano-Arabic dinar dating from 970 AD (359 according to the Hijri calendar). This dinar was used during the reign of Al-Hakam II, the second Umayyad Caliph of Córdoba, who ruled over Al-Andalus from 961 until his death in 976 AD. This 1000 year old coin is offered at auction for € 850. (see here) 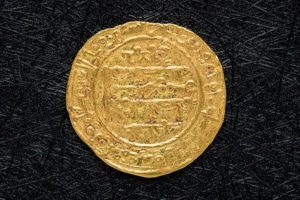 Last but not least, in the jewelry section we came across a great quantity of superb objects. The first lot we want to feature is number 206; a functioning Cartier ladies wrist watch model Santos 100. This jewel is made of 18K yellow gold with the crown and the case adorned with diamonds. The strap is original and made of orange leather. It will be auctioned for € 10,000 (see here). Next, a magnificent 18K white gold necklace formed by two rivières of diamonds. Definitely a pendant fit for a queen.  It is offered at auction for € 25,000. (see here) 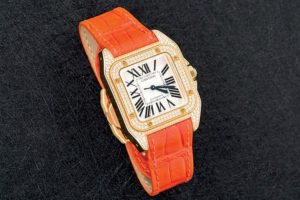 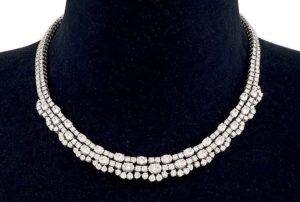