20 Mar Picasso: Prints by Pablo Picasso from the Collection of Marina Picasso

Posted at 10:24h in Actualidad Arte by The Art Market 0 Comments
0 Likes
Share

The Marina Picasso collection of Picasso prints opens the door onto the fascinating creative processes explored by her grandfather, Pablo Picasso, in the world of printmaking. It has been said that for Picasso ‘new printing techniques were like new lovers. They inspired him to take new approaches and renew his creative instincts’.

Picasso made over 2,200 prints, inventing techniques as he explored the individual media. This collection takes us through his development in etching, aquatint, lithography and linocut and includes striking examples of his innovation and experimentation. At each stage, this development was supported and encouraged by the most adventurous master craftsmen and technicians, which resulted in groundbreaking successes.

From the very beginning of his career, Picasso was interested in printmaking. This was printmaking as a form of expression, as a technique that could achieve results not possible through drawing or painting. In later years, he used the process of printmaking to record the development of his creativity, printing impressions of an image, before re-working the plate and printing the next image in the sequence. These sequences of images show the thought of an inventive genius.

When Picasso arrived in Paris in 1900, he had arrived in a city that was leading the world in print and publishing technology. After borrowing a large copper etching plate from his neighbour, Joan Gonzalez, another Spanish artist working in the Bateau Lavoir, Picasso etched his first substantial work, Le repas frugal, in 1904. He then took this copper plate to the printer Auguste Delâtre, who printed the magnificent, rich impressions that were to encourage Picasso to experiment further. This was Picasso’s first encounter with a master printer. It was only a short time after this in 1907, that Picasso bought his first printing press from the printer, Louis Fort. The influence of these close relationships was to continue throughout Picasso’s life. Evidence of this collaboration can be seen in the first lot in the collection: Joie maternelle, 1922, which was printed by Louis Fort and inscribed ‘Une des deux épreuves tirées par Fort en 1930’. Now, with his own printing press, Picasso was able to investigate not only printmaking processes, but the printing itself, which gave him the flexibility to experiment at any time of day and night.

One of these experiments was the inking of the plate for Baigneuses sur la plage. IV, 1932 (lot 4). He inks the surface of the plate, as one would ink a woodblock, the effect is to print the image in negative. Another exploration of the theme of the bathers, Sur la plage. Trois baigneuses, 1932 (lot 6) was printed by Picasso himself. This subject is one of many bathers scenes that the artist made at this time. It has been suggested that these subjects may have been a reaction to an incident in 1932 when his mistress Marie-Thérèse Walter contracted a potentially lethal virus while swimming in the Marne. 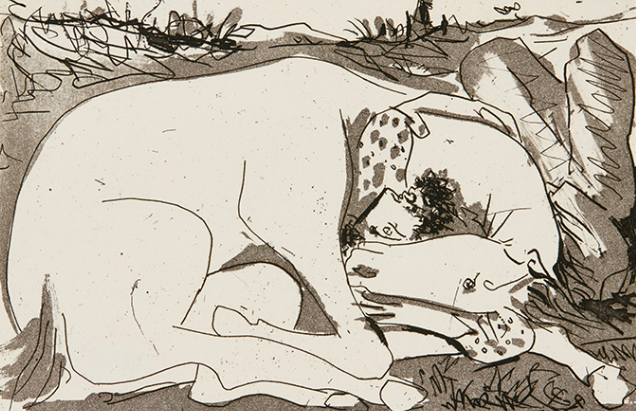 The 1930’s was a time of enormous political upheaval in Europe as well a period of great innovation for the artist. On 26 April 1937, during the Spanish Civil War, German planes bombed the Basque town of Guernica. Shortly before, Picasso had met the printer Lacourière who had introduced him to the different techniques of the aquatint. He mastered this with rapid success and used it with great effect in the set of ‘comic strip’ etchings, Sueño y mentira de Franco (Planche II), 1937, as a response to the bombing.

In September of that year, Picasso exhibited his masterpiece Guernica in the Spanish Pavillion at the Exposition Internationale, together with his etchings of the Sueño y mentira de Franco (Planche II). These etchings were sold at the Exposition to raise funds for the Republican cause. The set comprised two sheets, each with nine postcard-sized images. The idea was to cut out the individual images and use them as postcards. There are five proofs of these powerful subjects included in the collection (lots 9-13). These impressions were printed with sugar lift aquatint, before the plates were steel-faced for the printing of the edition.

Picasso was to perfect the use of sugar lift aquatint in such series as L’Aveille (L’Abeille), 1936 (lot 16), and Toros en el campo, 1957 (lot 33). The collection also includes a unique example of this technique, the witty composition Visage et tauromachie, 1960 (lot 34). As Picasso mastered these new techniques, he would combine several techniques within the same image, so the wonderful portrait of his new wife Jacqueline on their wedding day, Jacqueline en Mariée, de face. I, 1961 (lot 35) combines aquatint with scraper, engraving and drypoint.

In 1945, Picasso’s life was about to change again. The World War was over, Picasso had fallen in love with Françoise Gilot and he was ready for a new challenge. That year he met the great lithographer, Fernand Mourlot. Lithography is the technique most similar to drawing and particularly expressive for portraits (see lots 18, 21, 26, 35 and 45).

After the War, Picasso moved to the South of France, leaving behind the great print studios of Paris. Initially, his printmaking was restricted to his visits back to Paris or a complicated system of sending the worked plates back to Paris and waiting for the printed impressions to be returned to the south. Although this system worked for a short time, it removed the spontaneity from the creative process.

It was not long before Picasso met the linocut printer, Hidalgo Arnéra in Vallauris. Picasso wanted to make a poster to advertise the Vallauris Art Exhibition, a local show, and approached Arnéra with the idea. Arnéra suggested that he experiment with the linocut technique and very soon Picasso had not only mastered the technique, he was pushing its boundaries. Initially restricted by the complexities of printing linocuts in colour, he devised the ‘reductive technique’ which enabled all the colours to be printed from the same block. Not content with this invention, he began to experiment with ‘washed’ linocuts. Once the image block had been printed, Picasso worked it with ink and then placed it in the bathtub. Then rolling up his sleeves, quite often with Jacqueline to help, he showered the prints with water, which removed the ink from the surface of the printed areas but left the residue in the unprinted areas. He enjoyed working on this process himself as each ‘rinsing’ was unique, the final image the result of chance (lots 27 – 30).

These experiments with printmaking were not only the product of a highly creative mind; they were also the results of great friendships with the printers and their technicians. Perhaps one of the greatest examples of these relationships is Picasso’s friendship with the Crommelynck brothers.

Aldo Crommelynck had started work in the Lacourière studio, before setting up his own workshop with his brother Piero in 1955. They began working with Picasso on a series of etchings that would grow to number several hundred as Picasso’s output increased. With this number of plates, it became impossible to print and proof the prints in Paris when the artist was living in the South of France. The problem was solved in 1963 when Aldo and Piero decided to set up their studio in Mougins. This gave Picasso access to a print studio and technicians whenever he needed them. This availability stimulated his work and he created several hundred etchings towards the end of his life (lots 45, 51 – 68).

The Marina Picasso collection of prints gives us a unique access to the explorations and experiments of the artist. It is possible to see the development of the printmaking techniques and to witness how the artist expanded the boundaries and made them his own. Many of the works are of great rarity and some are unique, but all capture the essence of a great artist.