This year 2018 has continued to meet the forecasts of recent years: rising. So, these first eleven months (remember that several rooms have presented auctions in the month of July) have brought very interesting results. For the moment, we bring you the nine highest sales this season. Inside ranking!

1. Young Tagalog couple in front of a river, by Felix Resurrección Hidalgo.

It was sold in October, in the Madrid Segre room. The interest on Young Tagalog couple in front of a river, a pair of oil paintings on canvas that made up lot 120 of the auction of the Viso room was clear: numerous domestic and foreign offers, especially Philippine, harassed the work of the Philippine Félix Resurrección Hidalgo (1855 – 1913). This piece came out unprecedented in this auction, and represented the peasants with the typical clothing of the Philippine Islands of the time, around 1879. The auction began and, as expected, the piece rose rapidly from the scarce 40,000 € of your departure until the historical € 950,000 of your sale. And it is said soon, but few sales of this caliber have been seen in the history of Spanish auctions. 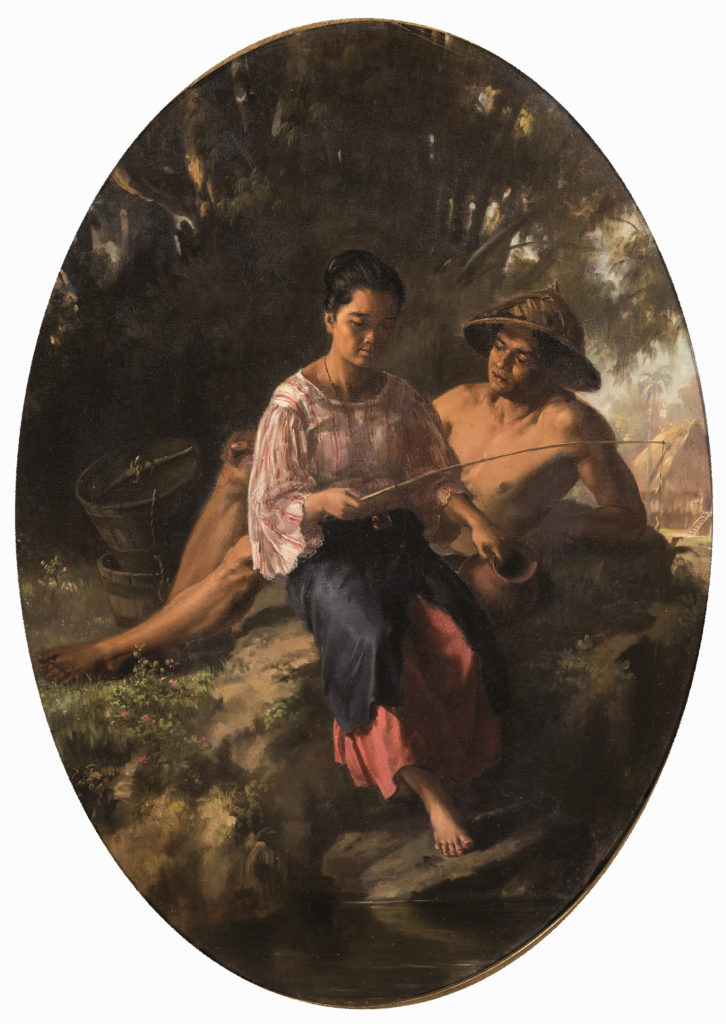 2. Child of the thorn in a landscape, by Francisco de Zurbarán.

It was sold in Abalarte, in the auction of the month of February. It was an oil on canvas of 110 x 82 cm, which had been found by Emilio Gómez Piñol in 1966, in the town of Oñate, but which had not been attributed to Zurbarán (1598 – 1664) until 2010, and as a follower of, by Odile Delenda, to now confirm his authorship, eight years later. It left for € 400,000, and several experts spoke about the difficulty involved in selling this price (for reasons already well known, such as the shortage of sales of quality pieces of great masters in Spain), but instead it was sold by said estimated price, to a telephone. 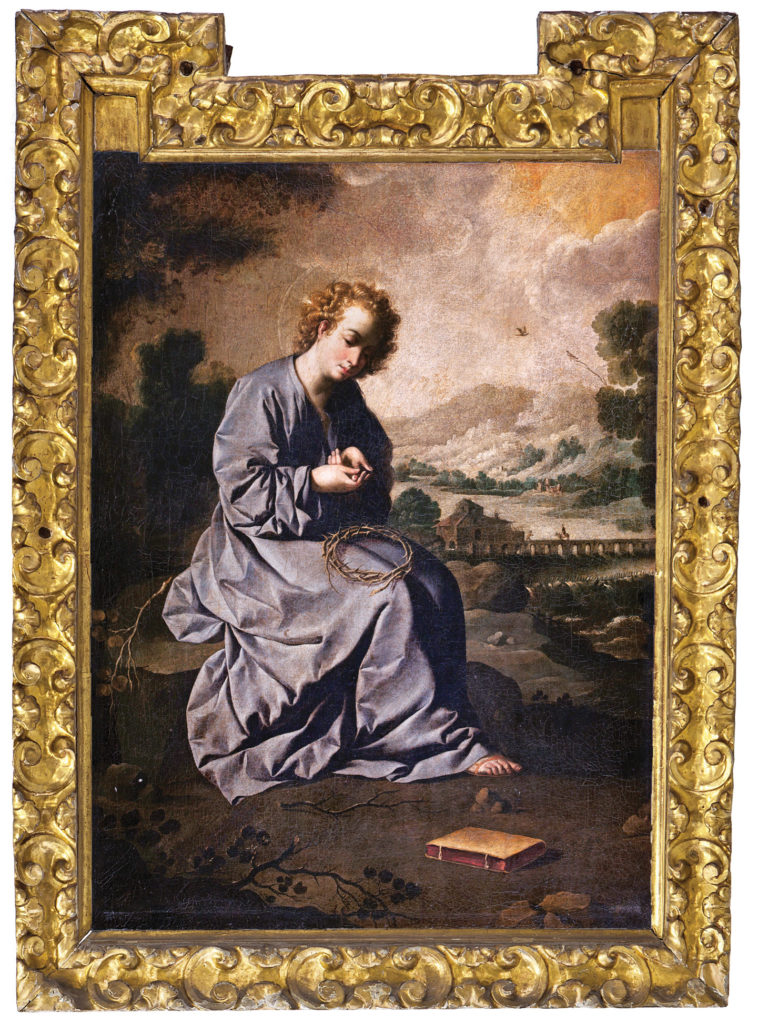 3. The Chariot I, by Fernando Zóbel.

As could be expected this month, this great oil painting on the first-time tile of the Philippine Fernando Zóbel rose considerably in the auction of Fernando Durán in October. For € 40,000 this oil painting representing Our Lady of the Rosary of La Naval, Manila, a study for his work entitled The Chariot II. Therefore, it was quite clear that it would rise like foam, and it did. € 200,000 reached the Philippine painting. 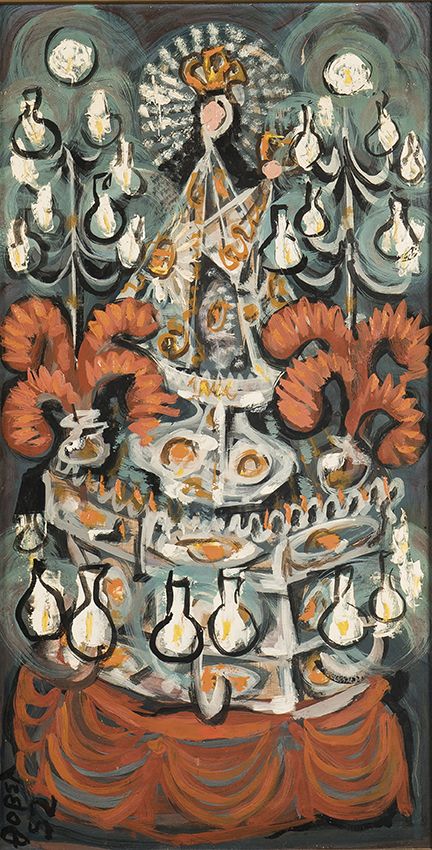 4. Triptych of the Virgin Mary with Jesus in her lap on landscape background; in the wings, in the upper part and in niches, San Roque and San Sebastián, and Eva and Adán, naked, in the lower part, of Pedro Machuca.

In this case we speak of a small triptych in oil on panel by Pedro Machuca (1490 – 1550), which in total was 61 x 85 cm. It went out to auction in the Sala Alcalá, in the month of March, for € 40,000, a price that was considered even scarce for the quality of the piece. Between four bidders raised that price to € 180,000, which although it is suitable for the hand of Machuca, is also the second highest amount we have seen in the Spanish auctions. 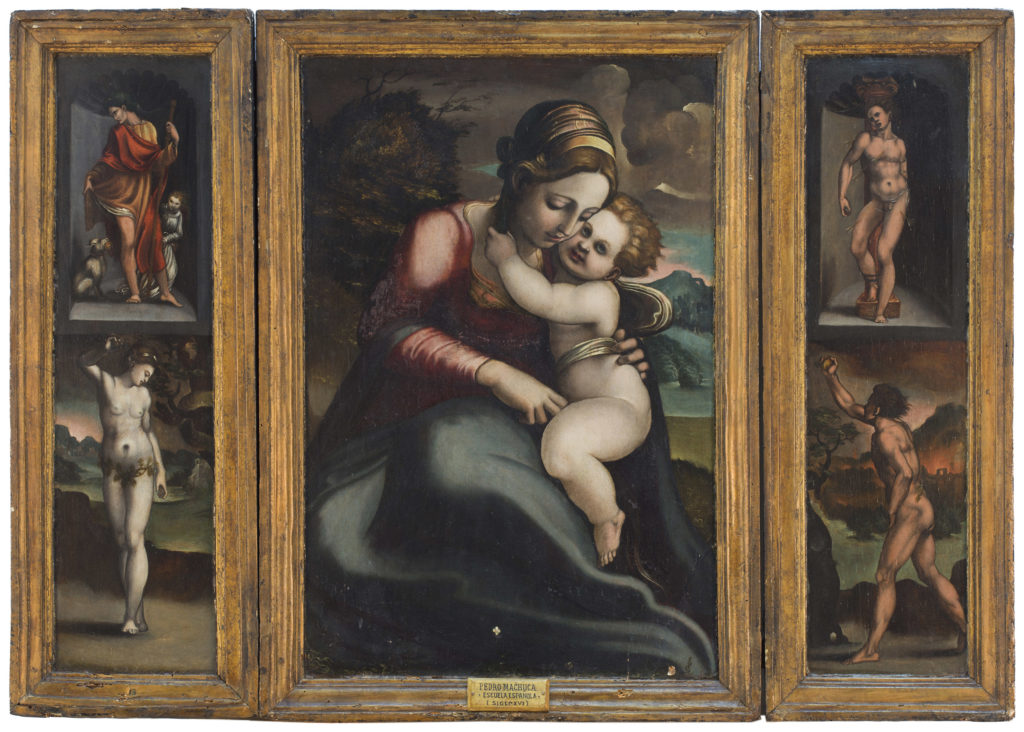 MACHUCA, PEDRO DE. Triptych of the Virgin Mary with Jesus in her lap on landscape background; in the wings, in the upper part and in the niches, San Roque and San Sebastián, and Eva and Adán, naked, in the lower part. Oil on board. 61 x 85 cm. Auction price: € 180,000 (Alcalá)

This sculpture was sold in Durán Arte y Auctions in its auction for the month of October, for € 160,000 (from a starting point of € 100,000). It came from Marian Goodman Gallery of New York, having also passed through the Carles Taché Gallery in Barcelona. This work came from the works deposited by the Ministry of Justice, ceded to Duran to undertake its auction (previously belonging to David Marjaliza, charged in the Punic operation). 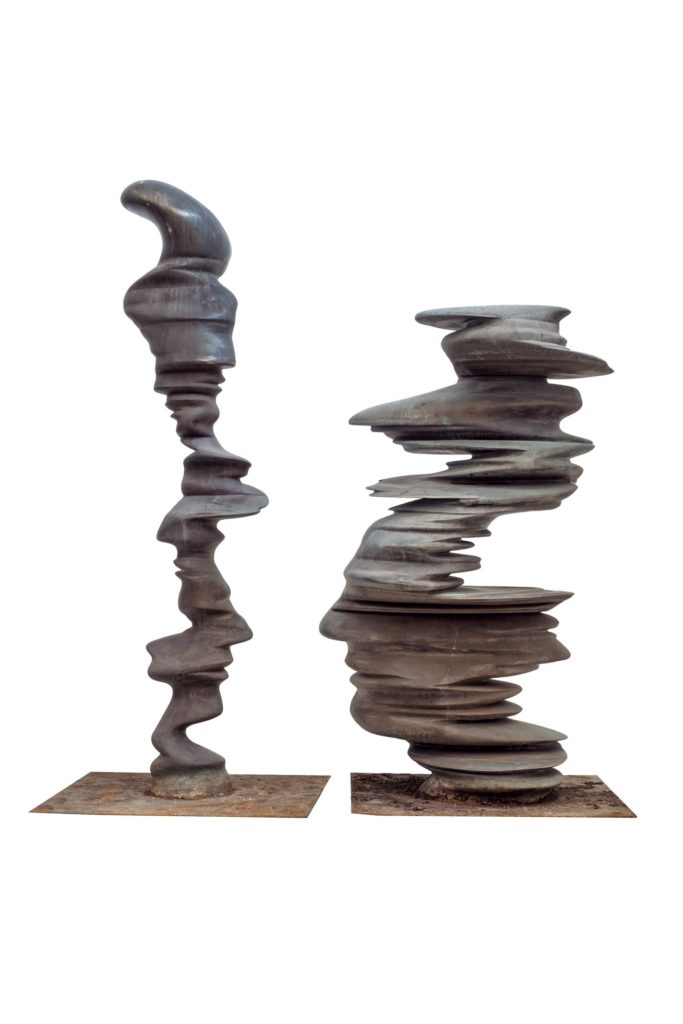 We continue with Alcalá, but this time we will talk about a piece that went to auction in June. This work by Mattia Preti is an oil on canvas, 208.8 x 146.8 cm, which also has endorsement by Alfonso Pérez Sánchez and Nicola Spinosa. It went to auction and, surprisingly, was not sold. However, fortunately, we can now say that it was subsequently awarded in the after-sales service for € 140,000. 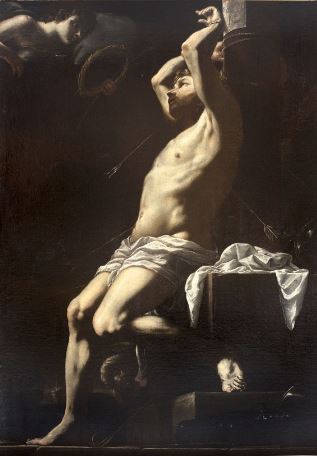 This work, wrought iron, was sold in the Canary Islands at the CI-CCA auction. It was awarded € 140,000, which automatically made it the star of the insular auction, the first in thirty years. 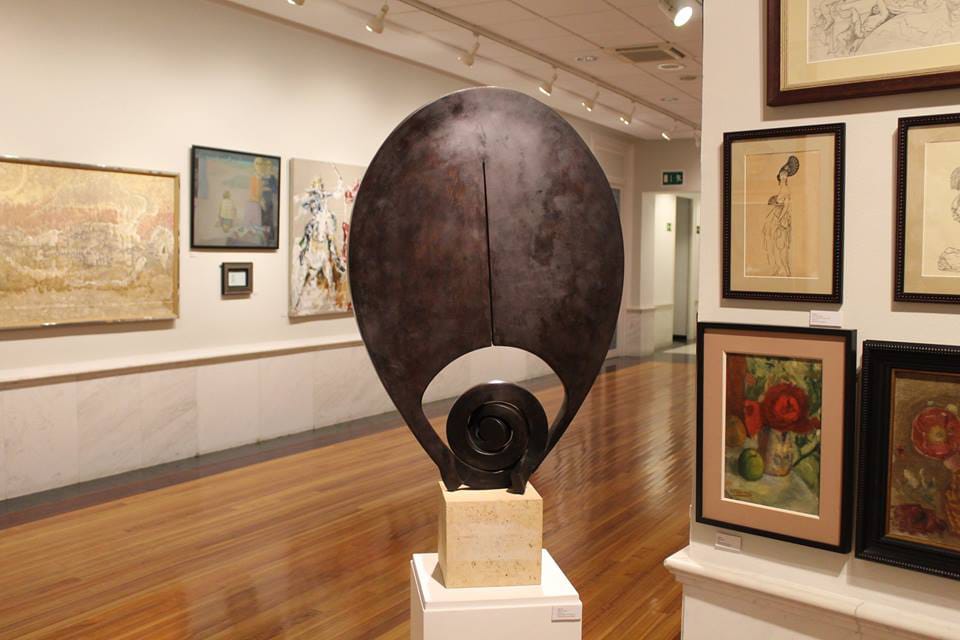 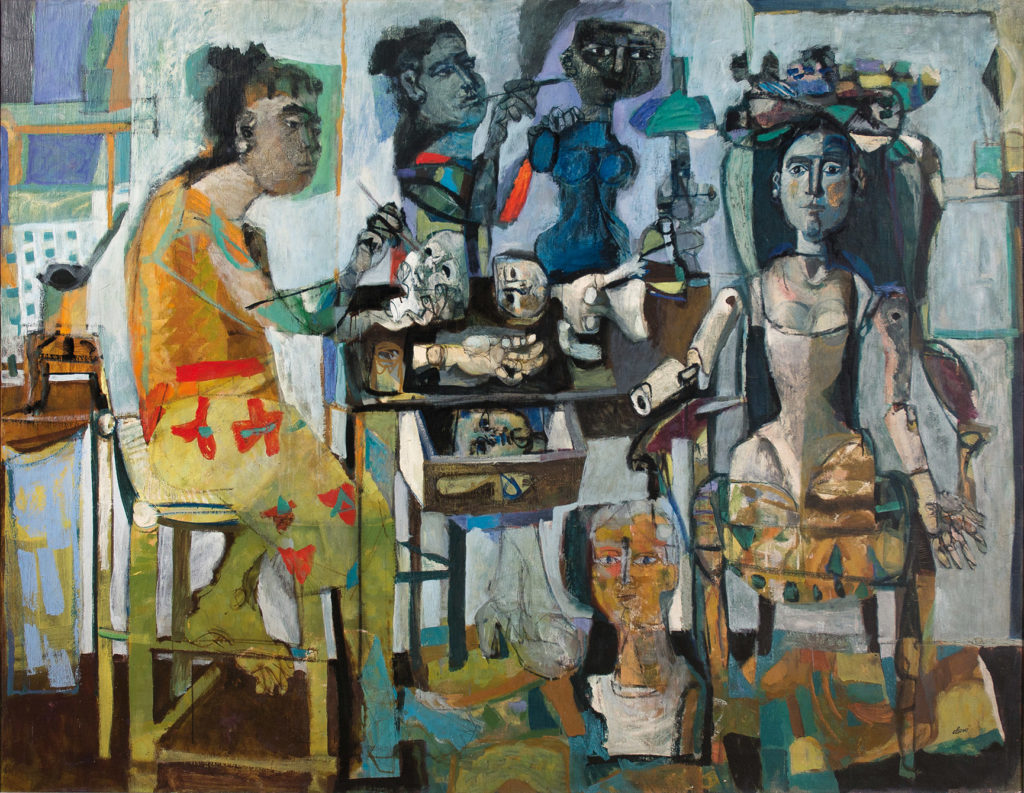 9. Before the cockfight, by Affandi.

And the Fernando Durán auction of July, sold the work of Affandi (1907 – 1990) an artist from Indonesia, which today is one of the most sought after names in the Asian scene (and this is saying a lot, taking into account account that this panorama has risen like the foam in the last times). Let’s put a number before continuing: his auction record happened at Sotheby’s Hong Kong in October two years ago, with € 1,130,897 paid for his oil on canvas entitled Borobudur and the sun (149.5 x 195 cm). In this case, Before the cockfight (98 x 141 cm) was sold, an oil on canvas attached to a board that was settled at € 130,000: thirty thousand euros above the starting price. 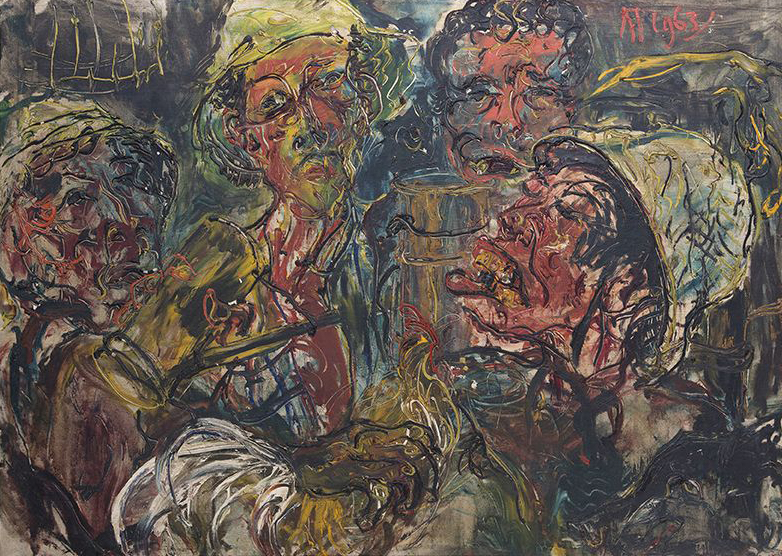