The news is already global knowledge: the main media of the world (televisions, social networks, global newspapers, etc), comment on the millionaire sale of Salvator Mundi. The painting of Leonardo Da Vinci has broken the bank, and superseded that of another genius, Picasso, as the most “expensive” painting ever sold at auction. On the fifteenth of November in Christie’s New York there was a “historical night” painting depicting Christ as “Savior of the World” that is attributed to the genius of the Renaissance was topped by more than 400,000,000 dollars (in the absence of adding the pertinent commissions), turning the work and the artist into the most sought after in an auction of an art. Da Vinci dethrones Picasso. 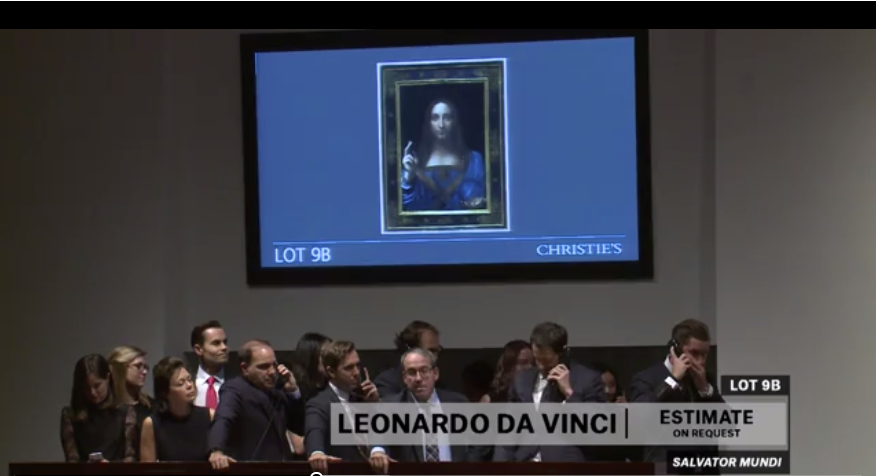 As explained by Christie’s “this amazing price reflects the enormous rarity of master Da Vinci’s paintings – only twenty are known by his hand and all in possession of museums. The worldwide interest in this work has led to its consideration as the most important in the last hundred years. “The work has captivated an audience of more than 1,000 people including collectors, dealers and journalists who attended the auction room located in the Rockerfeller Center plus thousands of others who followed in streaming from the Internet.

As I write this article I am seeing the sale of lot 9, the “Salvador del Mundo”, in deferred, and one can appreciate the excitement of the auctioneer, Jussi Pylkkänen, the reputed auctioneer who is also president of Christie’s, of the employees that pick up offers from the phone, the room or Internet; from the audience that sighs and laughs with the jokes of Pylkkänen, always ready to upload the offers. Do not miss these video minutes (they have the video available above) because they are pure spectacle, the one that defined so well Simon De Pury: “In New York we come to see how the rich spend money just like the Romans went to the circus”. In this same room, Les Femmes d’Alger (Version ‘O’) by Picasso was sold, raising $ 179,364,992. Since yesterday the new world record is set at $ 400,000,000, a figure higher than all the annual sales of art in Spain. Can we talk about crisis in the art world? Salvator Mundi or Salvator Artis?

Expert in online marketing with over ten years of experience helping companies grow in the online environment. Knowing the main marketing platforms of the art sector and how to get the best out of them to make them profitable. Twitter:@juanrgamero  LinkedIN